Before Costco. Before Wal-mart. Before the Hudson's Bay Company. Before Marco Polo brought silk from China. In a time, we cannot remember. At the time of Vikings, high seas adventure and world exploration; we had a people who had to take care of themselves. All needs - water, food, fire, shelter and clothing.

Cloth was not bought at the store. Stores did not exist as we know them. Cloth was made at home on a loom - of natural fibres: cotton, flax, linen or wool.

Each home had a loom or at the very least, one for each village. The Vikings Loom is pure simplicity. Effective. Portable. Repairable. User friendly. In fact, if you understand how it works, it can be built from scratch in the wilds, using very basic tools - saw, drill, chisel and a mallet. Supplies needed are also basic, 2x small logs, 2x planks, 2x "Y" branches, 2x dowels, a stick, a shuttle and some weights. 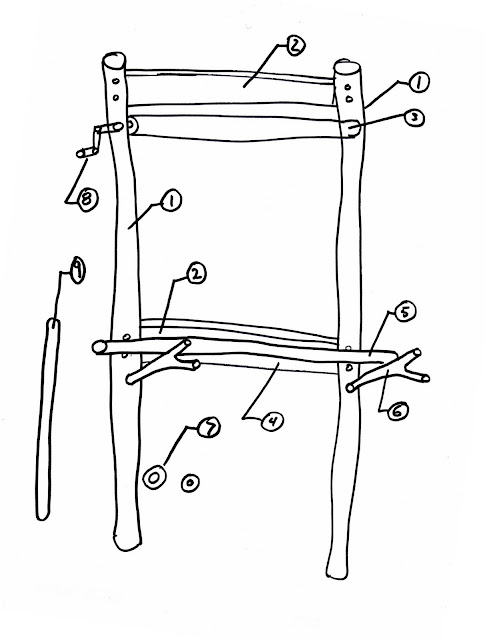 Upon review of the photographs we took while at the L'Anse aux Meadows National Historic Site - World Heritage Site in Newfoundland (2012), I notice my sketch of the Viking Loom has all the correct pieces, just the placement of the "Y" sticks on my sketch are too low on the frame. Please note, if you are going to build one of these looms that the holes you drill for the "Y" sticks must be higher up. My bad.

The parts of the Viking Loom. 1) The Frame Logs - you need 2. About 3" in diameter and 6' to 7' long. 2) The Cross Braces - you need 2. (#2 is the upper, #4 is the lower.) The space between the inside of the frame logs needs to be at least 38", so you can weave 36" wide fabric. These can be planks or again 3" diameter logs. Traditionally, they would be drilled and pegged with wood dowels. Screws or lag bolts would work, too. 3) The Upper Anchor Bar. About 37" long if you build it to fit inside the frame. If you copy the one in the photograph it will want to be longer than the frame is wide. To build one inside the frame, auger/drill 1 1/2" holes through the upper part of the frame logs. These holes want to keep the anchor bar level. The anchor bar will want to be a 3" - 4" log, straight, and 37" long. In each end of the anchor bar use your chisel to make 1" square holes about 1 1/2" deep to insert dowels so the anchor bar can be rotated. These dowels will need to be long enough to extend through the frame logs via the 1 1/2" holes you bored. If you are able, a crank handle can be fastened to one of the dowel-ends to make rolling the fabric easier. 4) Cross Brace Lower. Same as the upper cross brace. Mount the lower cross brace below the placement of the "Y" sticks. 5) Weaving Bar. This dowel or stick is about an inch or so in diameter, as straight as possible and longer than the frame is wide. Either strings, wires or holes are attached or bored through this dowel so that every other
strand of wool/flax/cotton/linen passes through. By lifting and lowering this bar; when the shuttle #10 is passed through, the weaving occurs. 6) The "Y" Sticks. These simple sticks allow the Weaving bar to be held in the up position until the shuttle is passed through the threads. You may want to bore multiple 1" holes +/- 1" deep into the frame logs, to allow variable mounting locations of the "Y" sticks. As you see in the photographs, the "Y" sticks are branches cut to size. 7) Weights. The weights hold tension on the strands of wool/flax/cotton/linen. As you may notice in the photographs, extra length of fibres are wrapped around the weights so the loom does not have to re-threaded as often. 8) Crank Handle. A simple crank handle will make rolling the fabric easier. Not required, but will make it easier. 9) The Beater Stick. This stick is used to keep the fibres tight after the shuttle has passed through. 10) The Shuttle. Forgot to draw the shuttle but is easy to see in the pictures. It is resting in the upper left corner of the frame. The shuttle is wrapped with the same fibre as is being weaved. The shuttle passes through the multiple strands and then the weaving bar is raised or lowered and then the beater stick is is inserted and pounds the strand up to keep the fabric tight. Continue. As space runs out to pass the shuttle through, use the crank to roll-up the fabric. Continue until you run-out of fibres to weave or the roll of fabric is to large to roll.

For those members of the Weaving Guild, please forgive me if I have used the incorrect terms to describe the Loom or the weaving process. I am keeping this as simple as possible, since a whole bunch of non-weavers may need to build a simple loom in their home for the future.

Imagine, if you will, having your kids putting in a few hours each evening on your very own Viking Weaving Loom, instead of surfing the 'net or playing X-Box!!! What would our world be like to have such things occur??

Until next time.....learn an old skill, you may need it in the future!!

Mountainman.
Posted by mountainman at 10:01 8 comments: 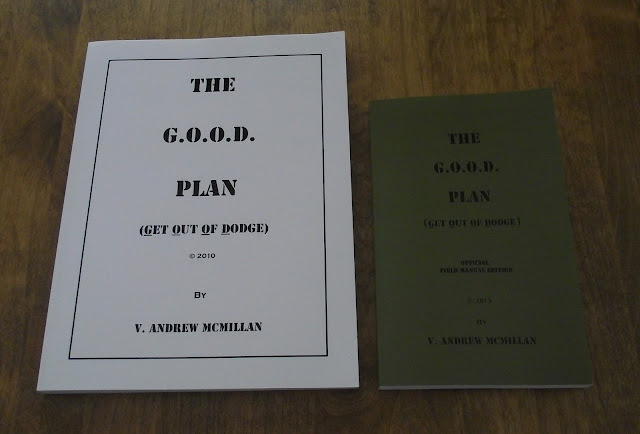 The G.O.O.D. Plan - Get Out Of Dodge  Field Manual Edition is now a reality. The good folks at Island Blue Print Co, in Victoria, BC have once again helped me out with the printing duties.

I am still searching for a publisher to take my book to the next level and bring my book to the world. So, if you are a publisher and you have heard of my book, feel free to contact me and see if we can work out a deal. I will be upfront on what the deal will not include: I will not sign away my rights to this project or any off shoots that may develop. I would like to see the public be able to have the option of an e-Book, a field manual and the soft cover version. My original idea of a Master Planner's Deluxe Binder Edition would be nice, although commercially unlikely. I can accept that.

So, I will continue to try to find a publisher.

Build Your Own Pack - More Pics 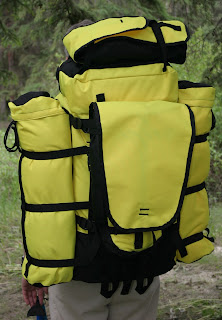 With recent increased interest in the prior post on building your own backpack. I have posted a few more pic's of some of the old projects.

The first pic's are of the pack I have named the LRRP - Long Range Recreation Pack. If used for members of a SAR Team it would change to a Long Range Rescue Pack.

Below are all the components of this variable geometry pack system. By adding or removing the components you can change the size of the pack you take with you.

Fully loaded, like the pic to the left, you can haul an large amount of gear to your base camp. Once there, you can use the Pigy-Pak daypack for day tripping from your base. 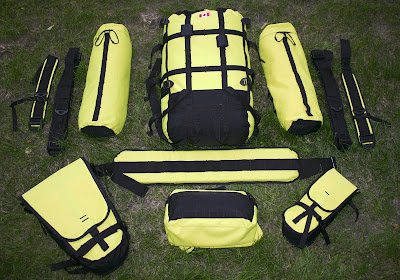 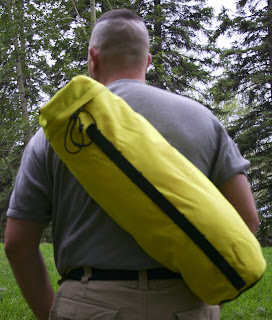 Depending on the size and shape of your gear, the side pockets can also be converted into a sling pack for day tripping. 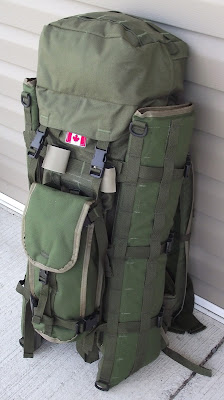 Of course, some pockets are special function. Such as the crampon pouch on the LRRP or the scabbards on this military patrolling pack.

The scabbards can be removed and the pack used without or tent pockets could be used in place of the scabbards. When removed the scabbard(s) can be attached to an ATV or slung. Making this quite versatile.

Enjoy the rest of the pic's.

Until next time....Keep you pack ready!!! 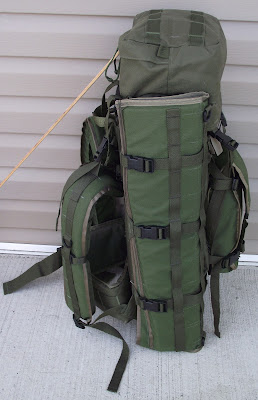 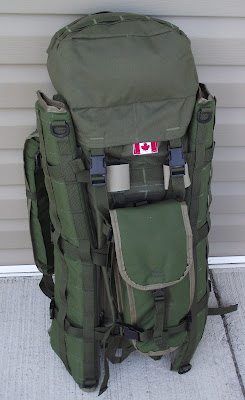 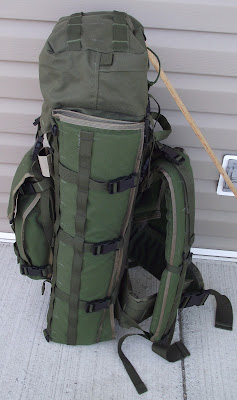 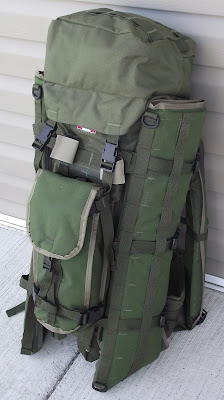 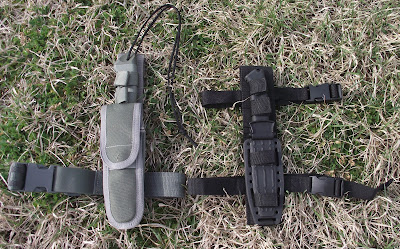 Here they are folks, a Gerber LMF II and a Gerber Prodigy - side-by-side.

No doubt about it, the LMF II is the big brother in this family tree.

A little wider, a little longer and a wee bit heavier.

So, enjoy these side-by-side photos. 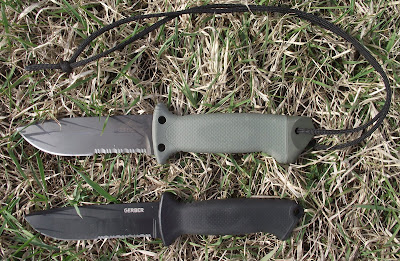 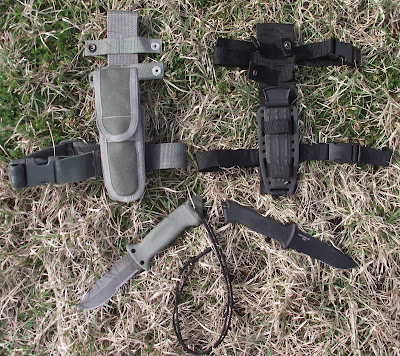 This particular LMF II has the airman's survival tool in the exterior pouch, which includes a webbing cutter tool to cut out of a harness in the event of having to eject from an aircraft.

Until next time.....Be ready out there!!

Mountainman.
Posted by mountainman at 08:22 No comments: