Let's talk about Chuck Boxes. I touched on this a few posts ago, but today we will focus on this valuable piece of camping gear.

The Chuck Box was the Kitchen on the wagons that headed West during the Frontier Days. The Chuck Box made it possible to have all of your cooking, baking, eating equipment and provisions to be organized and available when camp was made at the end of each travel day.

Now, lets jump ahead to the 1950's & 60's. The Scouting Movement, kept the Chuck Box traditions alive. Keeping the Kitchen Gear for their Troop contained in one, almost portable, wooden unit. The Chuck Box following weakens a bit through the 1970's, 80's and 90's.

Now in the 21st Century, you are hard pressed to find anyone using a Chuck Box for camping or any other activity. Everyone has switched from tenting to RV'ing. No need for a Chuck Box when you actually have a Kitchen.

But, not all is lost. The popular "Prepping" movement has been resurrecting a lot of lost  and
almost forgotten skills, tools and practices used by the pioneers and early explorers. The Chuck Box, may yet, see a revival.

As, you may notice from the pictures, I am not a carpenter nor a cabinet maker. However, with a set of hand drawn simple plans, a circular saw, an electric drill and some plywood I was able to fashion a useable set of Chuck Boxes.

The larger of the two holds the cooking and eating utensils, as well as, the Coleman stove. The smaller Chuck Box keeps the dry goods, spices, pot holders and a plastic tub for washing dishes. Both units keep the critters and weather out. With
the little carabiners, I am guessing Raccoons and maybe even bears would have a tough time getting the doors open. Of course, if you keep a clean camp these scavengers will be feasting at somebody else's camp not yours.

The interior was painted with white melamine paint, so they are easier to wipe down and keep clean. An important consideration if you want to stay healthy in the bush.

Protect your Kitchen and you won't go hungry!!

I have been looking for the plans I drew up for the Chuck Boxes, still not located. When I find them I will scan them and add them to this post OR I way make a new post with the plans featured.

Here is page one of the Chuck Box Plans: 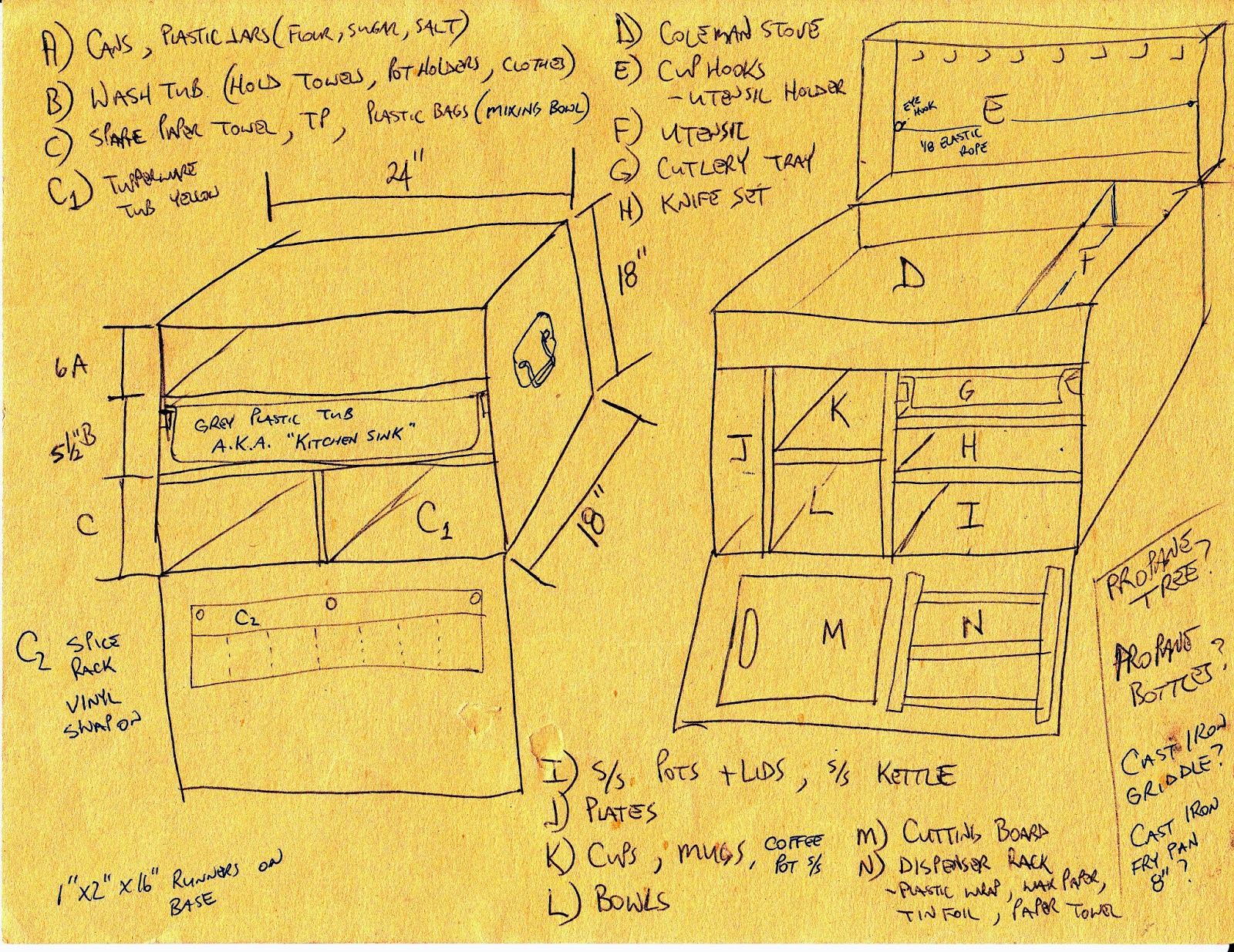 Here is the link to the rest of the plans:

Mountainman.
Posted by mountainman at 10:42